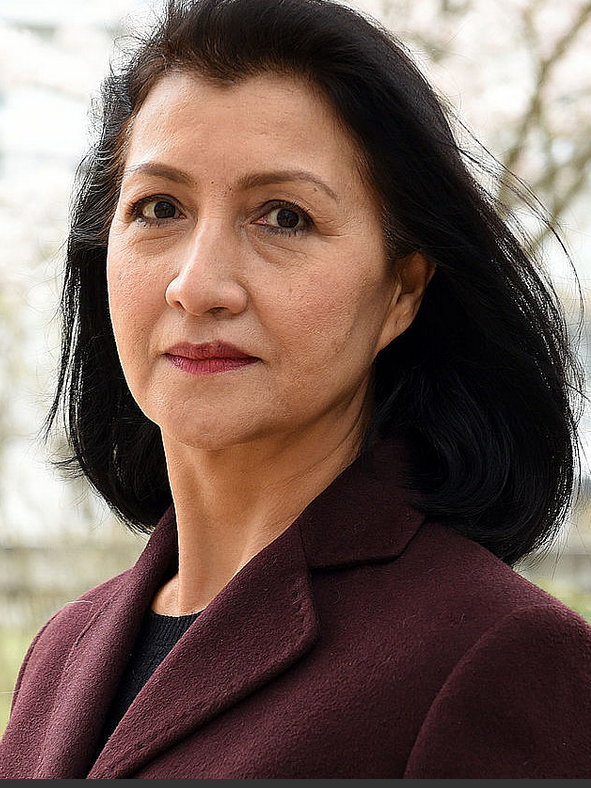 The testimony has been written by an anonymous shahit.biz volunteer who goes by the initial "H", as based on publicly available information. It has also been supplemented with additional media reports and direct information from the victim's daughter. H.

Gulbahar Haitiwaji is an ethnic Uyghur woman who had been living in France with her husband and two daughters since 2006. She is the only one in the family who has not received French citizenship, but nevertheless holds a 10-year residence permit. name: Gulbahar Haitiwaji
gender: female
ethnicity: Uyghur

Gulbahar holds a Chinese passport as well as a 10 year residence permit of France where she has been living with her husband and two daughters since 2006.

On 25 November 2016, Gulbahar received a call by her former employer in XUAR asking her to return to China and to sign documents to get her pension. Upon her arrival in the office in Karamay, she was immdiately taken into custody. Her passport was confiscated and she was not allowed to leave the region. On January 29, 2017, Gulbahar was official arrested at Karamay airport when returning from Urumchi. Since that day, the family has not been able to contact Gumbahar directly.
A letter from the French Foreign Ministry, which Gulbahar’s family in France received on November 13, 2017, states that Gulbahar was officially arrested on January 29, 2017 and remained in custody until June 5, 2017, when she was released on bail. According to some sources, she was then put into a “re-education” camp (or 9 June, depending on source) for the time an investigation was being carried out. It is unclear what kind of investigation is being carried out or how long this investigation may take.

During her time in camp, Gulbahar was only allowed one visit per month by her mother. Gulbahar’s mother has stopped contacting the family in France in May 2018 when she was put under pressure by Chinese police telling her to stop calling abroad. On December 27, 2018, Gulbahar's daughter, Gulhumar, publicly posted that the family had learned that her mother had been sentenced to 7 years in prison.

According to her daughter, she returned to France in late August 2019. probably Karamay

[according to her daughter: returned to France in late August 2019]

On November 25, 2016, Gulbahar received a call from her former employer in Xinjiang, asking her to return to China in order to sign pension documents. She was immediately taken into custody upon her arrival at the office in Karamay, with her passport confiscated and with her being forbidden from leaving the region.

She was officially arrested on January 29, 2017 at the Karamay airport, as she was returning from Urumqi, after which her family in France would no longer be able to contact Gulbahar directly.

A letter from the French Foreign Ministry, which Gulbahar’s family in France received on November 13, 2017, states that Gulbahar was officially arrested on January 29, 2017 and remained in custody until June 5, 2017, when she was released on bail. According to some media sources, she was then put into a “re-education” camp (on June 9, according to one source) for the time of the investigation. It was unclear what kind of investigation was being carried out or how long it would take. It is also very possible that this was not a camp but simply prolonged police custody, perhaps in a different location.

On December 27, 2018, Gulbahar's daughter, Gulhumar, publicly posted that the family had learned that her mother had been sentenced to 7 years in prison.

In March 2019, Gulhumar suddenly started receiving phone calls from her mother, with the latter telling her that she had been released to house arrest and that Gulhumar should delete all of her public posts about the case if she "ever wanted to see her alive again". Returned to China in November 2016, which is when her documents were confiscated.

Given documents and allowed to return to France. She has high blood pressure and needs to take medication daily. Believed to first be in a “re-education” camp, before being sentenced to prison.

However, in March 2019, the family received a phone call from Gulbahar who confirmed having been
‘freed from the camp’. However, she remains under house arrest without her passport. Gulbahar told her family that if they wanted to see her “very soon and alive”, all publications regarding her detention would have to be deleted. Her daughter is convinced that her mother made this statement under pressure from Chinese authorities. Still, her daughter deleted all related posts on facebook in order to keep her mother out of danger.

[according to her daughter: returned to France in late August 2019]

It appears that most of the information that Gulhumar and other family members got they got through the victim's mother, who was allowed to visit the victim once a month. However, Gulbahar’s mother stopped contacting the family in France in May 2018, when she was pressured by the Chinese police to stop calling abroad.

The story has also received ample coverage in the press and other public outlets, and much of the information used to write this testimony was taken from there: 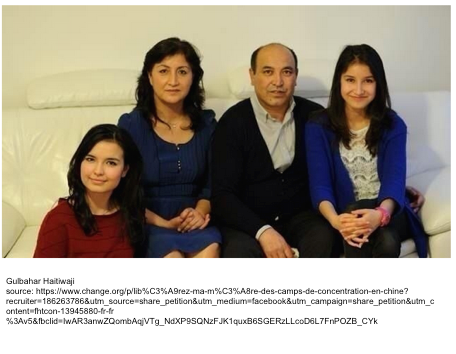 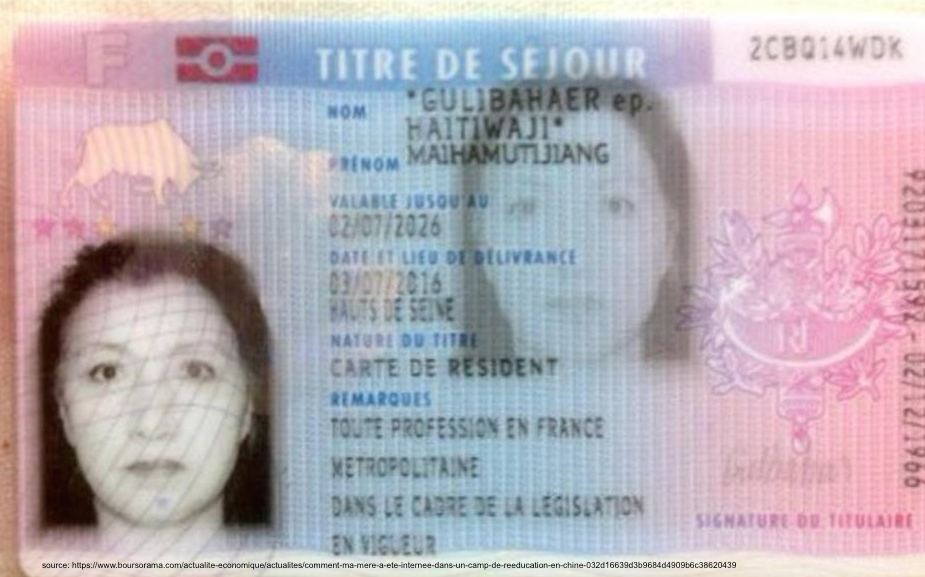 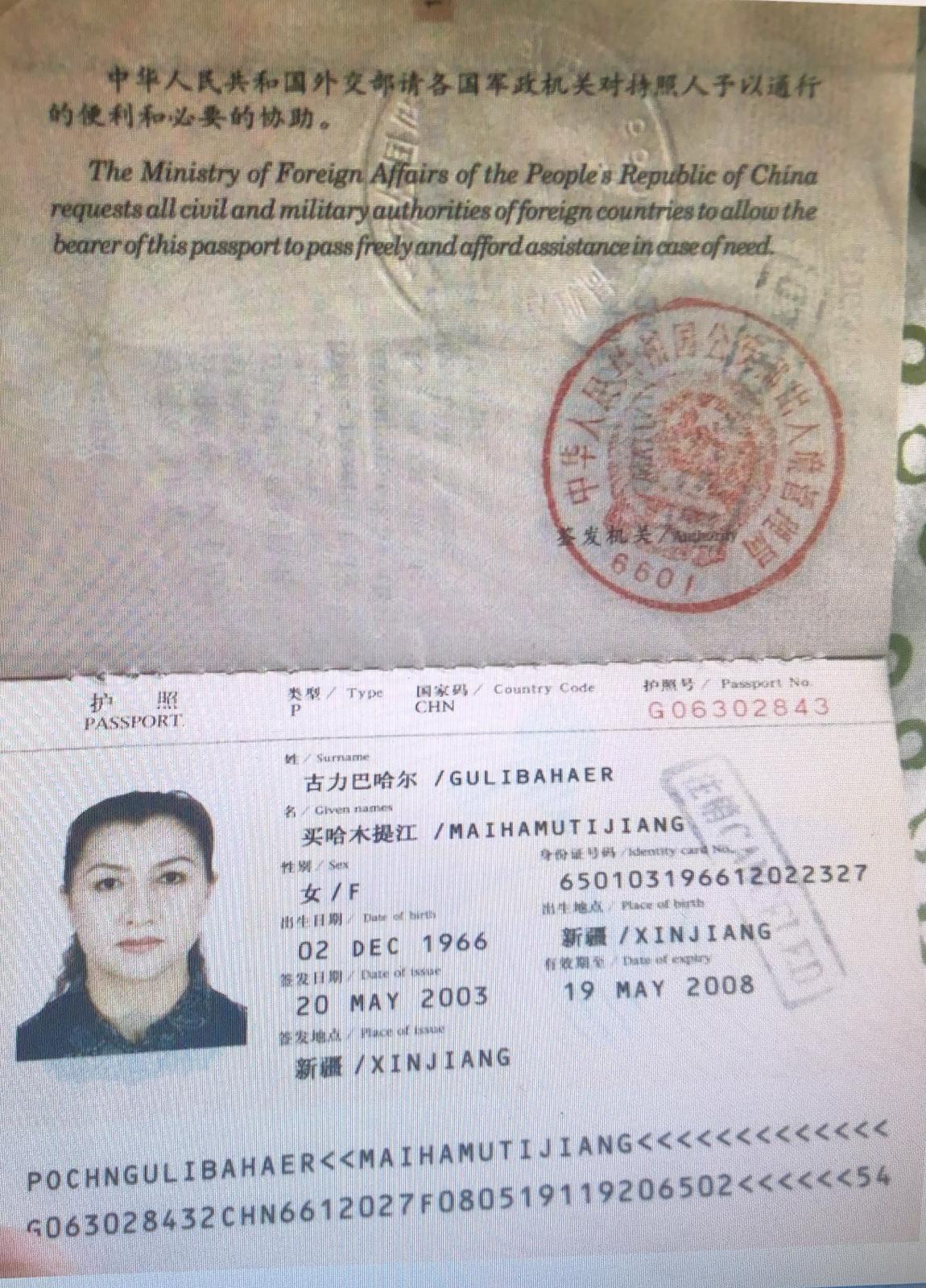